Now that you've narrowed down your interests, found a scientific field to investigate, and know the right type of project, you need to pick a specific science fair topic.

Let's assume that you've decided on a project that requires some scientific investigation -- a real experiment.

The trick to coming up with a great topic is simple: BE SPECIFIC!

The more specific you are, the easier your project will be to design, carry out and analyze.

Let's say that you like to garden, or take care of plants, and so you have chosen botany as your general area of study. But you can't do a science project called "Botany," because there's just too much information. There are many thousands of books on a subject that big, and some people go to school for years to study it. It's too broad, and we'll need to narrow it down by being a lot more specific.

Let's try to focus on one aspect of botany for your science fair topic idea. We'll say you like to grow tomato plants in the garden. You have noticed that some of your plants grow a little faster than others, and some of the tomatoes end up being much bigger than others.

Now we're getting somewhere! Instead of just talking about plants in general, we're dealing with a specific question about a specific plant: why are some tomatoes bigger than others?

But it's important to be even more specific when choosing a science fair project topic. So we need to do a little thinking and imagine the things that could affect the size of your plants. Sunshine, water, and soil are three things that affect plant growth.

To be more specific, we should only pick one, so let's pick sunshine. Reword the question to be the most specific that it could possibly be: "Does the amount of sunlight affect the size of tomatoes?" There! Now that is a very specific science fair topic, and one that could make a good science fair project.

Of course, no matter what science fair topic you've chosen, it's important to be as specific as possible.

Here's another example. Let's look at zoology. Zoology is the study of animals. But there are so many animals, and so many subjects that your science fair project would be the size of an encyclopedia! 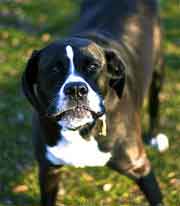 So let's be a little more specific. Why do you like animals? Maybe it's because you have a pet--your family dog would be a good place to start. Let's think about your dog and related science fair topics. Certainly training is on any dog-owner's mind, so one science fair topic idea you might explore is how to best train your dog.

But this still isn't specific enough. Why? Because it asks a question that has an "open end." This means that the answer will be more complicated than just a "yes" or "no." Instead, it asks for specifics about how best to train a dog.

So we should think about the possible variables, including the length of training sessions, the type of dog, and the reward system. In other words, what kind of treats can be given to the dog for good behavior. That last one sounds good, so let's reword your science fair project topic to be the most specific it can be:

Does the type of reward affect the ability of a dog to be trained?

So before you decide on a science fair topic, make sure that it is as specific as possible. That will make everything easier for you. It may also make the difference between a science fair topic idea that impresses the judges, and one that doesn't take you to the next level of competition.

So, what's the next step? It's time to design your project and plan the experiment so that we can address the question you've worked so hard to formulate.