Why do animals hibernate? It solves some big problems that they face during the cold winter season. And one of the biggest problems for most animals is finding enough food.

If an animal's main food source is very scarce in the winter, like insects or green plants, the solution may be hibernation. This deep sleep allows them to conserve energy, and survive the winter with little or no food.

Most hibernators prepare in some way for the winter. Some store food in their burrows or dens, to eat when they awake for short periods. Many eat extra food in the fall while it is plentiful. It is stored as body fat to be used later for energy.

Hibernators have two kinds of fat: regular white fat and a special brown fat (brown adipose tissue). The brown fat forms patches near the animal's brain, heart and lungs. It's main purpose is to provide extra body heat. It also sends a quick burst of energy to warm these organs first when it is time to wake up.

True hibernators go into such a deep sleep that they are difficult to wake and may appear dead. Their body temperature drops and breathing and heart beat slow down significantly. For example, a hibernating woodchuck's heart rate slows from 80 to 4 beats per minute, and its temperature drops from 98 F to as low as 38 F. If its temperature falls too low, it will awaken slightly and shiver to warm up a bit. 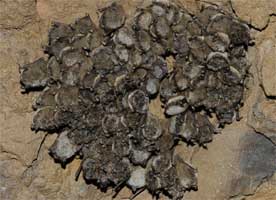 Other true hibernators include the jumping mouse, little brown bat, the eastern chipmunk, and some species of ground squirrels.

There is even a bird that appears to be a true hibernator. Called the gray and white poorwill, it is related to the whippoorwill and lives in the mountains of Colorado.

If an animal lives in an area where the winter is mild, it may hibernate only briefly, or not at all. However, even when the weather is severe, hibernators may wake up for short periods every few weeks to use their "toilet rooms" and eat if food is available.

Other hibernating animals do not experience major changes in temperature, heart rate and breathing. Animals such as skunks, raccoons and some chipmunks are the light sleepers, easily awakened. They may sleep during the most severe weather and wake to roam and eat during milder weather. 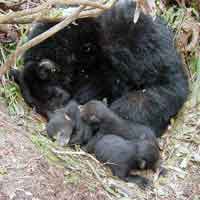 The largest hibernators are the bears. Although a grizzly or black bear's heart rate may drop from a normal of 40-50 beats per minute down to 8-12, its temperature drops only slightly, allowing it to wake up quickly. These bears are also unique because, unlike other hibernators, they do not eat, drink, or excrete at all while hibernating, which can be as long as six months.

How do animals know it is time to hibernate? This is still a subject of research. Hibernating animals have something in their blood called HIT, or Hibernation Inducement Trigger. Recent research suggests that it is some kind of opiate, chemically related to morphine. As the days get shorter, the temperature changes, and food becomes scarce, HIT triggers hibernation. How and why it happens are still a mystery.

There are other animals that hibernate, or become dormant, daily. Many tiny warm-blooded animals have huge energy requirements. It is difficult for some of them to consume enough food to maintain themselves. To conserve energy, animals like hummingbirds and little brown bats become dormant for part of each day.

Just as there are places where food and water are scarce in the winter, there are other places where these resources are scarce during the summer months. For example, many environments have a hot, dry season. To survive, some animals aestivate ('es-ti-vat), which is comparable to hibernate. While the northern ground squirrels spend the summer eating and preparing for winter hibernation, ground squirrels living in the southwest desert may avoid the extreme summer heat by aestivating in their burrows.

Other Ways to Survive the Winter

Hibernation is not the only winter survival strategy that animals use. Instead, animals may: migrate, adapt or find shelter....

Discover more about the winter survival strategies for animals, birds and insects .... Try these projects →